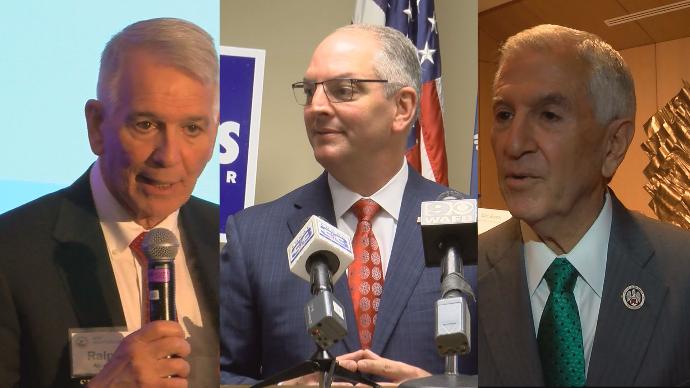 Going into the 2015 Louisiana gubernatorial election, no one expected the Democrat to win. Yet, after a longshot campaign that led to a runoff between him and former U.S. Senator David Vitter (R-LA), John Bel Edwards emerged as the 56th governor of Louisiana.

Since then, Gov. Edwards has bucked the party line and worked towards several bipartisan initiatives focused on reducing crime and uninsurance.

Edwards hails from a small town on the outskirts of New Orleans called Amite. The son of a sheriff, he was set on a life of public service from a young age.

Edwards graduated from high school as the valedictorian in 1984 and immediately set off for the United States Military Academy at West Point, graduating with a bachelor’s degree in engineering in 1988.

After eight years of military service, most notably commanding the 3rd brigade of the 82nd Airborne Division, Captain Edwards left the armed forces to attend law school at Louisiana State University. Earning his juris doctor degree, the highest law degree in the U.S., in 1999, Edwards then started his own firm called Edwards and Associates.

Edwards practiced law until 2007, when he was once more drawn into the public sphere by running for a seat to represent the 72nd district in the Louisiana House of Representatives. This district encompasses a large part of Tangipahoa Parish, including the towns of Amite, Kentwood, Greensburg and a section of Hammond.

Edwards was considered a rising star in the House as he was the only freshman representative to chair a committee at that time. Further, he was later chosen to chair the Democratic caucus for the House.

He was re-elected in 2011 by a landslide, beating out Johnny Duncan 83 percent to 17 percent.

Despite firm opposition from Republicans, starting off, Edwards led by a significant margin.

The 2015 gubernatorial race was the most expensive in state history, with candidates and political action committees spending a combined $50 million.

Scandals rocked the race, with Vitter being heavily hit by both Edwards and his Republican rivals over his early-2000s involvement with a Washington, D.C. prostitution ring.

After being eliminated from the primary on Oct. 24, Republican Dardenne evoked anger from his party when he endorsed Edwards instead of Vitter. Reince Priebus, Republican National Committee chairman, wrote Dardenne a letter and called the endorsement a betrayal.

Gov. Edwards has focused on fiscal responsibility, higher education, reducing uninsurance and criminal justice reform. His first major issue to tackle was a $2 billion budget deficit left to him by the previous governor, Bobby Jindal.

Later in 2016, Gov. Edwards expanded Medicaid to cover thousands of individuals with no insurance. As a direct result, the uninsured rate in the state dropped from 22.7 percent to 11.4 percent in a year.

Gov. Edwards’ major criminal justice reform legislation was passed in 2018. These new policies made sentences lighter for nonviolent offenders in the state. That year, Louisiana lost its top spot as the state with the most incarcerations per capita.

The governor has also thrown his support behind teachers. In 2018, Gov. Edwards secured the first pay raise for teachers in the state in almost 10 years.

One of the most controversial policies that Gov. Edwards has supported in his tenure has been the “fetal heartbeat” abortion ban signed in May 2019.

Despite receiving a lot of criticism from Democrats, Gov. Edwards stands firmly behind his decision. Lawsuits regarding similar versions of this bill are pending in several judicial districts across the U.S.

Going into the gubernatorial election on Oct. 12, where he is contending for a second term, Gov. Edwards looks to be in a strong frontrunner position according to several polls.

In July 2019, the Edwards campaign reported $9.62 million in the bank to the Louisiana Ethics Board, which they say is the strongest financial position a candidate for Louisiana governor has ever been in.

The Secretary of State reported on Sept. 29 that the first day of early voting this year saw the second highest number of votes cast in early voting history at 77,059 votes, right behind the 2016 presidential election.

Early voting started on Sept. 28 and will continue until Saturday. The primary election will be on Oct. 12.

If no one wins a majority on Oct. 12, the top two candidates will face off in the general election on Nov. 16.

More information on Gov. Edwards can be found at gov.louisiana.gov/page/meet-the-governor or johnbelforlouisiana.com